BLUE HORS MATINE IS NO MORE

25 January 2010
Reprinted from Horse and Country 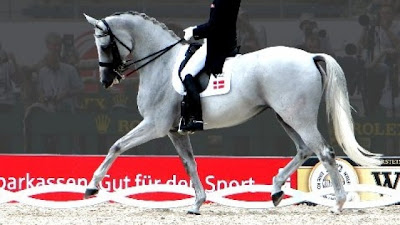 Matine in action with Andreas Helgstrand

The sensational dressage mare Blue Hors Matine has been put down due to a broken leg, according to a statement on the Blue Hors Stud website.

It stated: "Today started like any other for Blue Hors Matine when she was turned out to enjoy some freedom with her field buddy gelding Blue Hors Cavan. Unfortunately, it was the last day of life for Matine.

A passer-by noticed that something was seriously wrong with the white mare in the pen and immediately alerted staff. There was no doubt that Matine's right front leg was broken at the knee and the vet found immediately that there was absolutely nothing to do to save her life, says director Esben Møller.

13-year-old Blue Hors Matine by Blue Hors Silver Moon x Matador, bred by Inger B. Katballe, was just about to foal and hopefully make a career in breeding. The mare's sporting career has not been long, but it was very successful. With rider Andreas Helgstrand the mare had an illustrious career and achieved in record time to become one of the world's most celebrated dressage horses.

At the World Cup WEG 2006 the pair won the championship first Grand Prix at the huge stadium in Aachen. In the Grand Prix Special they won the bronze in the Grand Prix Kur they won the silver medal. Their Kur quickly became the most watched dressage video on the internet and the portal YouTube has been viewed nearly ten million times!

It is with great sadness that Blue Hors today have had to say goodbye to their wonderful mare, and she was undoubtedly a novelty that will touch people and horses dressage enthusiasts the world over."

Watch Andreas and Matine's freestyle performance from WEG 2006 at the link below. RIP Matine.