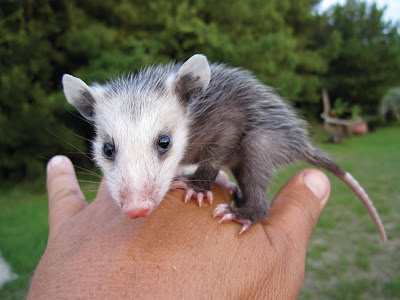 Since we're on an extended riding hiatus due to wretched heat and humidity I thought I'd introduce you to one of our neighbors... as per usual with neighbors, some are great and some - not so much :)

Today was my second encounter with bad baby opposum this week. I missed my chance to catch him the other day because when I ran to get my camera he skittered off. I was ready this morning. There really wasn't much catching as all he did was hiss at me and then act dead. (We haven't had any cases of rabies on the island which is why I handled this little guy.)

I'm guessing he may have fallen off of his mom in the woods nearby. Lucky for me, he didn't know he's supposed to be nocturnal. Unlucky for me he may have been attracted to Val's spilled food in the run-in shelter. This is not good as opposums spread the dreaded EPM. Don't even get me started worrying about that....

I'm hoping the wildlife rehabilitator (his new home as of midday) is correct and he was probably still nursing... hopefully not chowing on any infected dead critters just yet.
Posted by Calm, Forward, Straight at 10:50 PM