Big winds today and yesterday. Big as in 40 mph steady. It seemed like a good afternoon to spend grooming, de-hairing and pampering my special guy. It looks like we are going to get cold rain and a big drop in temperature tonight, so the rain sheet goes on. Who wants to wear a restrictive blanket over top of itchy winter sheddings? Val says not me!

Since it's been damp for a week, I thought I'd pay special attention to his feet, and give his frogs a dose of Veterycin (holy water) to stave off the funk. Despite the tarp canopy framming around wildly, Val patiently remained ground tied. (bragging) He doesn't love it. He eventually tosses his head up and down trying to dislodge and grab the lead rope I lay over his shoulders, but he stays put.

As I cleaned Val's feet, I wondered how they look compared to when I brought him home. It would have been great if I had thought to take pictures back then. My obsession with documenting only started once I began blogging.

I dug around and found a few pictures. The first one was right after the hurricane in September - Val ultimately went ten weeks without a trim, so please ignore the chipping. I trimmed him right after I took this picture. I had just begun using Veterycin, and magnesium, so it's a pretty good benchmark.  The second was taken in December - looks like we needed to get after those bars! And the third was from today. The dark areas by the toe are sand stuck to where I had scraped away some crumbly sole. 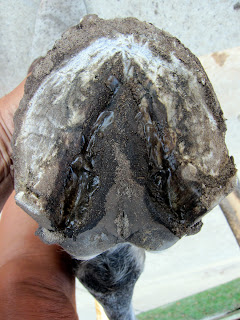 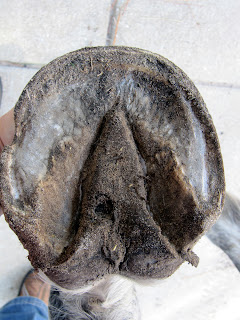 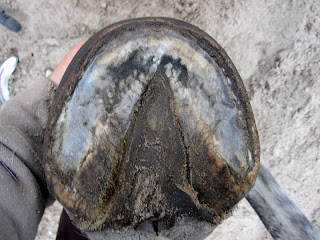 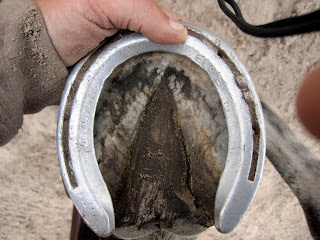 I also checked Val's foot against one of his old shoes. One difference I can see, is that the shoe hangs past the back of his foot now. I'm thinking this means he has more heel - that he's not crushed in the heel area. The toe looks squarer. I wish I hadn't cut them off in today's photo, because his heels bulbs are more robust now too. His older frog seems bigger, probably because I'd sprayed it up with the holy water, and he recently shed his current frog. The biggest and best change I notice is that the white line issues are negligible anymore. I'll take it! 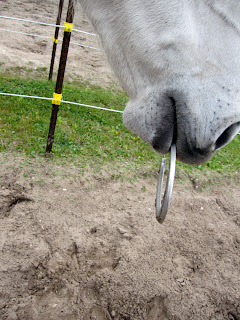 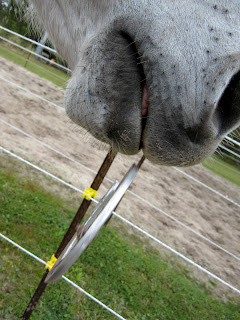 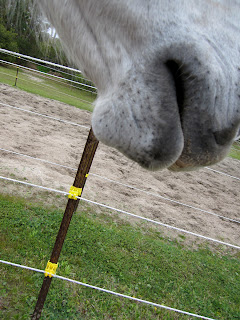