Our big excitement this week was the first tropical system of the season - Beryl. Say what?! No, not even kidding. 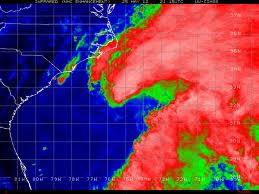 The beginning wasn't too bad - several hours of blustery winds and torrential rain. Eventually the eye / center of circulation passed directly over us. The moment it cleared us the winds went from 0 to gusts of 70. Tide came roaring out of the sound, and up the streets. People were scrambling to move vehicles to higher ground and attend to their boats. As usual the forecast hadn't called for any of the drastic-ness...

All I can say is if my tomato plants had gotten killed I would have kicked that storm's ass! (I parked my truck to block the main winds from the garden, and it worked.) Actually, all I can say is that if this had been August instead of May, I dread even to imagine the destruction we would have suffered. Island life can be dicey.

Weather and subsequent footing issues kept us out of the arena until this weekend. Yesterday afternoon I dragged the arena, groomed and tacked up for our first ride in a week. Val tried to convince me that the part of the arena beside Captain Outburst's property was a no-fly zone. I persuaded him differently by practicing leg yields into the area in question. I concentrated on my position, namely opening up my hip angle and getting my leg more underneath me, as well as all the usual non stop self reminders and adjustments.

This morning dawned with bright sunshine and cool breezes. After morning chores and the usual preparations, with extra attention to repelling flies, we got to work. Again, I paid attention to my alignment - ears, shoulders, hips, heels, as well as keeping my elbows at my sides and my eyes straight through Val's ears. As I have no one on the ground and no mirrors, I must rely on Val to let me know when I've got things right (or wrong!), which he gladly does.

Also, I put the cones back into the arena. They really help me to focus on keeping the school figures accurate. After picking up contact and achieving a nicely forward walk, we worked on trot transitions. There was a halfhearted canter stride the first ask, and after that I got the trot when I asked. Once again feeling the rhythm of the new gait was the first go at the transition - leg and crop only if necessary. Overall I think we gained some ground. Apparently it's going to take a while to restore confidence - mine and Val's. We'll chip away at it.

Afterwords Val got a scrubby bath plus a relaxing pick of grass. Then he helped me reinstall the stall awning that got trashed in the storm. He oversaw handling of the tarp, inspected the tools and licked my legs while I was on the ladder. It was a perfectly lovely day with my horse. 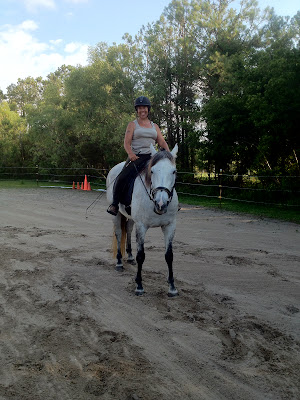 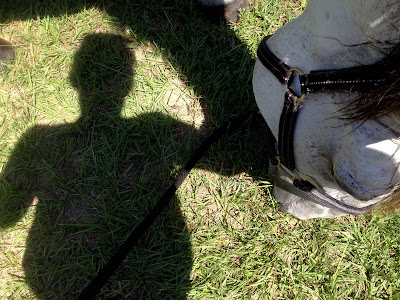 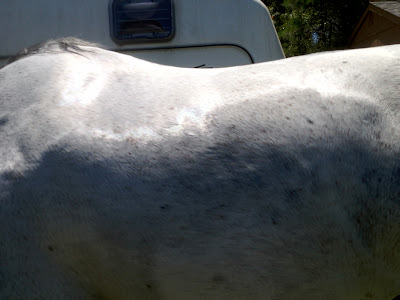 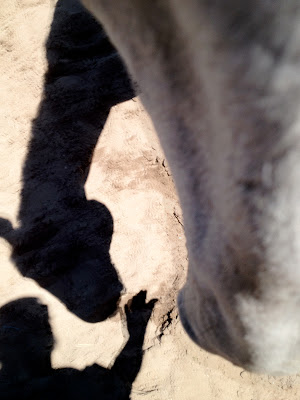 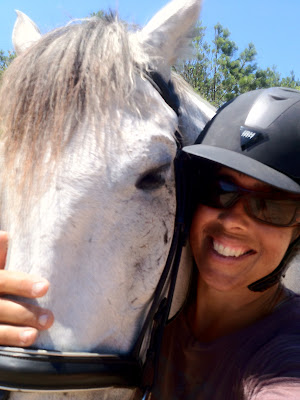 If you turn up the volume, you can hear Val happily snatching away at mouthsful of grass right in front of poor, poor Cowboy...

and groaning with pleasure - there's nothing like a good roll in the sand.