The longer between posts, the more stuff there is to post about. Not to mention the photo backlog... it gets overwhelming pretty quickly. Best efforts made to edit this down. :D

An overdose of emotional turmoil (or please indulge me while I whine):

Let's see... there was putting my dog to sleep + kicking out the disrespectful boarders, both of which starred in previous posts. A few days later, a close relative drove all the way here for a last minute visit. We hadn't been in the same room for six years. I tried not to be suspicious. I thought it might be progress toward reconciliation...

...but it was an ambush. Endless ranting about how I was the worst close relative ever, and endless examples detailing why. In public at a restaurant where I know everyone. *bummer*

Not too long after that fun time, my body rebelled and I succumbed to a case of shingles. Stress induced I am sure. Takeaway message - in the future, if I have second thoughts about anything, I go with my gut. No more Ms. Nice Guy.

Aaaaand my arena was out of commission most of the summer due to extreme footing depth - no support for horse or human. I could barely push the wheelbarrow and Val's feet slid and sank to the fetlock. Just like last year. That coupled with the fact that we're navigating dressage on our own, with miniscule budget for instruction and no suitable instructor closer than a five hour drive, had me questioning why I was bothering with this dressage dream... it was a pretty discouraging time.

Let's just say I wallowed. (wallowed my way to the grocery store for Haagen Daz)

The third week of October brought my staycation. Finally!

A week away from business to relax. A week devoted to catching up on my responsibilities at the farmette. A week to play with my pony. And what a week it was. Epically beautiful. Cloudless skies, slight breeze, 80 degrees day after day, the ocean still warm enough to swim.

During the wallowfest I had taken an objective look at my dedication  / commitment to riding, and came to the conclusion that despite all the excuses I could come up with, the reality was I hadn't been putting in the hours needed to get the results I desired. I tried not to beat myself up too much, and instead came up with a plan.

Time with my horse - deep grooming / massage, groundwork and / or riding five days a week. Period. So far our schedule has only been interrupted by Sandy's visit.

Val has been treated to several thorough massages which he loves. He stays put without haltering or tying, and is sure to let me know when I find a good spot. Occasionally I'll groom him equine style, on the withers and neck using my hands like some big horsey teeth. He loves that!

Groundwork has been mostly trail walks off property - about a dozen so far - and twice we've even made it fifteen minutes down the trail to the beach. Val has let his natural curiosity gradually override his vigilance. He seems to enjoy the change of scenery, and his trust in me is growing.

The rides have mostly been out in the open, no ring or fences. (and all bareback - haven't used the saddle in months) The first time I promptly lost steering and brakes, crawling up Val's neck instead of staying on my seat when he started feeling too light in the front end. I hopped off and did focused groundwork until he started listening to me. Round two = 50% steering / brakes recovered. One more round on the ground and then we went to work in the virtual ring. I have been told many times that I should resolve situations like this mounted, but I did what felt right in that moment. I'm prouder of working through that issue than most anything that's happened since I got Val. I was by myself, scared and wanted to quit, but persevered. It paid off.

Super Storm Sandy was only an anxiety filled inconvenience compared to what happened to those poor folks in the north east. Though once again, had she been a direct hit, we would likely have gotten wiped off the map.

Val handled it beautifully. I kept his regular routine as far as feeding and mucking, and switched out his sheets to keep him dry. His appetite never faltered, but he did sidle up to me and grab my sleeve most every visit. He found it as tiresome as the humans I suspect.

I'm very thankful. The Shimmy Shack is intact, we have power, and there is fuel to purchase without standing in line. What we don't have however, is a road off the island. Again. We may get it back by Thanksgiving. While I don't have an imminent need to leave, (unlike my friend who was due to deliver her (breech) baby this week), the prospect of a multi-hour wait for a two plus hour ferry ride does weigh.

Tying up the loose ends...

Everything happens for a reason. My time of too many objectionable feelings did provide valuable insight. Emotional equilibrium is indispensable in horsemanship. It doesn't come naturally to me, so I am on a mission to cultivate it. When I can achieve that state, Val rewards me beyond all expectations. (Like he did today! More on that in the next post...)

As of this week, I've gotten my arena back. (!) I've also inherited my old Kubota, minus the deck and other unnecessary parts, for full time harrowing duties, so the arena should be in good shape until next summer.

My goals for the winter are to regain the ground we lost over the summer - smooth, forward trot work and hopefully back to the canter, plus to reintroduce the saddle. Additionally to get out on the trails again. We've made great strides the last few months. I'm really proud of Val.

To that end, I had a fortuitous visit today from a woman I used to ride with at the trail barn, whose horsemanship I respect. She's recently returned to riding after dealing with back issues, and has offered to ride out with us for trail schooling. I'm cautiously optimistic, in an even keeled kind of way. ;D

For your viewing pleasure... 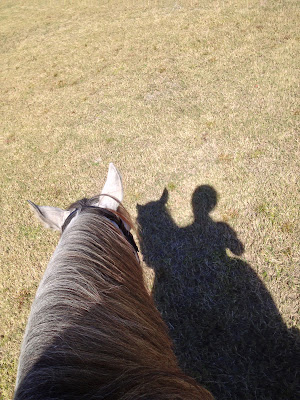