Well - we've been out of commission so long, most of our readers have probably forgotten all about us. I've been struggling for a while with how to make the transition back to posting. A Soft Spot for Stars blog hop seems like a handy way to "get back on the horse" so to speak. Thanks so much to those of you who checked in.


Equestrian life is challenging here on the Outer Banks. Land is hard to come by, we're very remote, and the climate can be harsh, so overall even basic horse-keeping is an expensive endeavor. 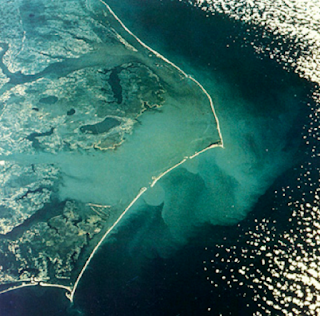 The nearest decent hay source is a 7 hour round trip to SE VA. Nice square bales of second cutting orchard grass are $10 - $12 each, usually weighing around 50 lbs. Val consumes 150 bales a year. I can store 100 bales if I cram the two hay barns to the rafters. Best to do this by December to have all the same crop. (to do otherwise invariably leads to frustrating hay strikes when switching to the new flavor) That will usually last until hay is harvested again in the summer.

To find the true cost, I have to figure in fuel and travel time. This adds another $200 to the truckload - usually fifty bales, making the per bale cost more like $16. (multiplied by three or four trips a year) 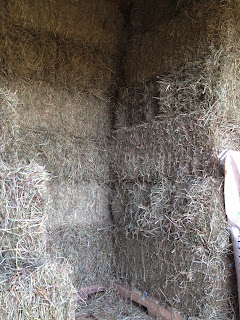 Luckily, the local Ace Hardware carries Southern States, so feed is just a twenty mile drive. They are great about special ordering, and give rewards on all purchases. TC senior is $25 a bag, beet pulp $20, and my ration balancer $35.

[A slight digression: This fall I had stocked all the winter hay by October and was super psyched about my stockpile. Then there were two hurricanes in one month. The second storm (Matthew) brought the worst flooding in at least a hundred years. My property has never flooded before, and I had three feet of salt water covering the entire farmette. Both of the hay barns and the tack room flooded.

Less than 24 hours after the flood waters receded, the wet hay was almost too hot to touch, and had to be un-stacked to avoid the barns spontaneously combusting, sorted to salvage what I could, and disposed of - about half of the hay. I didn't even document this part because I was in shock and then utterly demoralized. I lost all the animal feed, many tools and machines, the entire garden, and my tack room was an utter disaster area.

Biggest bummer: the bottle of hoof dressing tipped over in the tack room. While floating around it covered everything touched by the water in sticky black oil. (which was everything)

SO very lucky: I had taken all my tack out to clean and it was stored in the one building that didn't get water.

Still unclear on the state of the Brenderup... haven't been able to face that situation yet, beyond obsessively rinsing and spraying anti-corrosive on all parts that got under salt water. *heavy sigh*]

There is only one barn that boards, and they advertise full board at $450, "scheduled feedings twice daily along with free range of hay and turnout, stall cleaning twice daily, bedding, parking for your trailer on the premises." Turnout is in the riding ring, which doesn't meet my safety standards due to fencing issues and debris. There is no pasture or grazing here.

Real estate here is expensive. My nearly three acres was initially $250k, which I eventually got for $110k. This was basically raw land. Still saving towards house building...

The nearest quality dressage instruction is 3.5 hours away in SE VA. When my trainer was still teaching, lessons were $50 for an hour. She generously let me come up for a weekend to get two or three lessons at a time, and I traded barn work occasionally. It was an ideal situation for me. I was lessoning regularly, progressing as a rider. I miss her terribly. Sadly, I haven't had a lesson in years, with none on the horizon unless something can be worked out with remote technology.

Most of the local riders are trail riders - a pretty spectacular proposition with 70 miles of beach to explore. There are thriving dressage and eventing scenes mid-state - a round trip of 10+ hours. The nearest showing (I've flat out given up on this possibility) is also either SE VA or mid state. I'm contemplating Working Equitation at the moment, and with a more well suited horse in the future I'd like to try endurance. 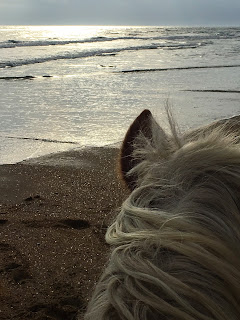 Nearest tack stores are also SE VA, and are expensive. With all the online options this isn't an issue.

I pay $40 for a trim. Not sure what shoes cost as we've been barefoot for about six years. For the last several cycles my farrier has just done a few corrections. I am taking over the trimming responsibilities. I've done this out of necessity because our farrier situation is always tenuous. He travels over 3 hours to get here and generally has to stay overnight to get all the horses without rushing. I don't think he makes much on his trips here.  I arrange the schedule for him and make sure all the horse owners "show up".

I'm searching for a natural balance dentist at the moment. My former dentist doesn't want to come this far out of her way - she was traveling from MD. With her, Val had his teeth done standing in his run in, un-sedated and at liberty. The nearest dental practices in Va are vet connected, and will probably insist on sedation. I'm leery of trailering that far and having to withhold hay on the return ride because of sedation. If anyone in SE VA or eastern NC reading this has a dentist recommendation please share. :D

The nearest equine vet is also 3.5 hours away in VA. They do not come to the island. I give all the vaccinations (excepting rabies) myself, and the small animal vet kindly pulls a coggins and gives Val a once over at the same time. He actually removed a melanoma from Val's anus (tmi) over the summer, saving me time and money. I assisted for the surgery - it was pretty cool actually. Val is a super cheap drunk - he had half-rations of anesthesia and proceeded to cut major zzzzs while the cross ties barely held his big 'ol head off the ground.

Summers are hot and humid - generally in the mid 80's with 80% - 90% humidity being the norm. This is hard on Val and me. (landscaper) Thank goodness a jump in the ocean is never far away.

Fall and winter can often be very mild and comfortable, with less humidity and mosquitoes. This is the best time for riding, with average temps of 40's to 50's and the occasional nighttime dip into the 30's. A hard winter here would be several weeks of sub-freezing temps. It rarely snows, but is almost always windy, so big wind chills are common. Spring can be beautiful, but it is often stormy and unsettled.

Basically - life on this island swings between insanely beautiful and ruggedly inconvenient. It's not for the faint of heart, but I wouldn't trade it for anything.