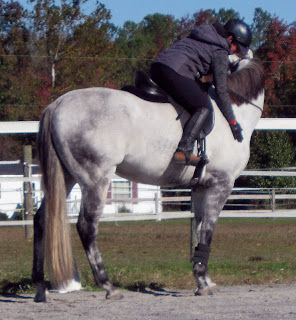 Monday afternoon. One of my goals for this clinic was to figure out how to accomplish the warm-up in a timely and efficient fashion, without relying on input from my trainer. We only work with her every few months, so we need to do this confidently on our own. Without spiraling down into a battle of wills or stalled out in one of the corners. Done. Addressing conquering our steering stickiness / leadership issues has made a world of difference.

We moved on to some gorgeous trot work, initially full arena on the rail, moving on to the quarterline and then school figures thrown in. Both directions (!) Everything felt smooth, workmanlike... best of all easy and FUN. We also worked in two point for a while to adjust my ankles and their lack of springiness. Let's just say it's been thirt- (cough, cough) years since I rode in two point. Oh - did I mention that this was done with another horse in the arena with us. A year ago I would have had a total (internal) melt down at the thought of having a lesson with another horse in the arena. A superlative ride. We have come a long way, and I just love my horse :)

Tuesday. I groomed / tacked up a horse for my trainer, then watched her ride for a while. Afterwords we switched off for a longing session. I rode Star, a very well built and powerful thoroughbred mare, with big gaits. Most of this session focused on my position, and how to use my driving aid / legs to encourage Star to carry herself. Another issue we worked on is my (bad) tendency to lead with my chest and get ahead of my horse. Acknowledging that you have a problem is the first step as they say... We also did a bit of sitting trot work. It is very challenging to process all of the information that I get in my lessons, and when we do position work - changing so many elements at once throws me for a loop. It would be interesting to see how my afternoon ride on Val would be affected...


Later that afternoon. Another great warm-up, getting right to work, and again with company in the arena. My seat felt fantastic. Apparently I was able to incorporate some of the input I got during the longing session. Val really enjoyed the extra room he had to breathe since I was not pinching with my knees. It showed in his gaits.

At this point my trainer suggested I try some cantering. We decided it would be best to ask for the transition from two point, coming into a corner, and after a couple of aborted attempts we did canter. I was totally disorganized and frankly - extremely sore from the longing earlier. I elected not to try again, not wanting to open a can of worms with this new step we were taking, that would have to be resolved. I felt a bit like I was being a chicken, but honestly I wasn't sure I could count on my body to do what I wanted - we were getting on three hours of riding for the day. Also - it was dinner time and the other horses who weren't still at work were doing mad dashes, bucking up and down the fence lines. Val was focused and attentive considering the distractions. Instead we worked on transitions and turns on the forehand, ending on a good note. Another great ride :) 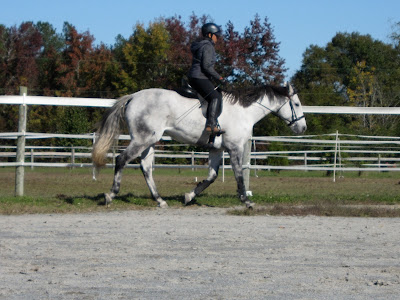 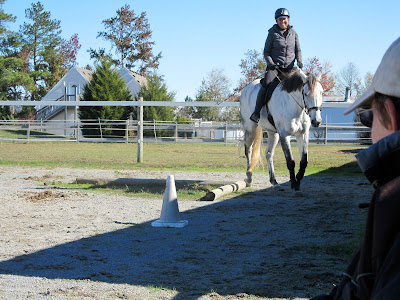