I realized that I have been mentioning / complaining about / obsessing over my arena situation non-stop lately, so I thought I'd post about what Val and I are dealing with, and how I'm going to make it better.

Val is living in our current workspace - our "arena". A modest electric fenced paddock with an irregular shape and increasing amounts of ever deepening sand. He has lived there for over a year. His day to day movements have churned the sand to a depth of maybe eight inches in some places - especially in his wallow holes. He generally has three of these going at any given time. 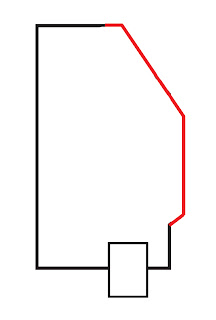 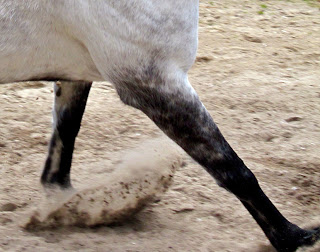 Now I know I shouldn't complain about having to deal with sand because the pros
mostly outweigh the cons...
Until we have sufficient space with consistent safe footing, or it rains more regularly, we'll be sticking to walking with limited trotting down the long sides. No sharp turning or cantering. We'll have to save all that for when we're at my trainer's farm.

A while back I created a small temporary "arena" for my boarder to work in - hunter / jumper style. She can set up a jump or two in there, but it's not level and she tends to rut it up endlessly circling. I mostly use it to desensitize Val to the extra scary back of the property, where my "real arena" will reside. 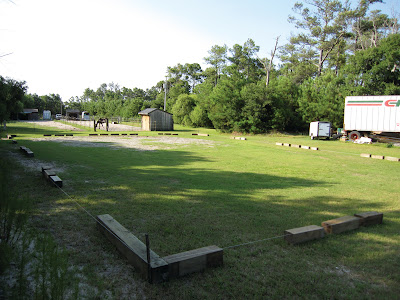 I have room for a 160 x 80 dressage arena. This project will require five tandems of sand (give or take) to make the whole back of the property level and create the actual arena with proper drainage + a number to be determined of crush and run gravel loads, many hours of grading and rolling, and some sort of fencing. I hope to accomplish the project over the winter / asap. Check back for updates :)