More piano memories... I was ten years old. It was my turn to perform at a recital of the Leschetizky Society - a big deal. I was nerve racked as usual. I remember sitting down on the bench. I remember starting to play Chopin's Raindrop Prelude. Then I remember the hearing last notes fade away, and taking a bow. Nothing in between. As I sat back down beside my teacher, she leaned over with an astonished look, and uncharacteristically whispered in my ear "How did you do that - that was the best you have ever played?!"

How did I do it? Faithfully practicing the basics. Scales, scales, scales. Boring, boring scales. Memorizing the piece hands separately. Breaking it down by the phrase, then by the note. There is no substitute for getting the basics down. Period. Once you have the fundamentals - I'm talking muscle memory - then you are free to infuse the music with your soul.

So - how does this relate to dressage? I am struggling to learn how to ride. Gently, tactfully, effectively, graciously. At the moment (for the foreseeable future) my focus is the basics. Balance, contact, consistency. The training pyramid. It doesn't always make for super interesting blogging. The pace of progress seems glacial.

Saturday (my birthday) dawned absolutely gorgeous, and despite a jam packed schedule, nothing was getting in the way of my horse time. After reading Val at Memoirs of a Horse Girl's recent post  which had some great video of she and Harley jumping a cloverleaf pattern over cross rails, I had the bright idea to lay ground rails in the same pattern, an X basically, and use them to spice up our trot work.

We began with an excellent warm up on the buckle, walking over the rails. Val was all about the new X, from the moment I dragged it into the arena. He could barely contain his attraction. I picked up a trot, working my way over to the X. He sort of hesitated a few times before crossing them, so on the next go round I really gave him a squeeze with my legs. Any guess where this is going?

Val cantered a couple of collected strides, rocked back on his haunches and (way over) jumped the rail, cantering on afterwords acting very. proud. of. himself. I was shocked. Mostly because it's been cough--ty some years since I've jumped, and I was usually over-horsed and petrified when I did it then. And, as Val (blogger Val) pointed out, dressage saddles aren't ideal for jumping. Super glad the video didn't capture that moment!

We halted. I gave Val a big hug and cracked up for a few minutes, then got back to work. On nearly every request for the trot from then on, I got the canter, and I had to abandon the rails for a while. Eventually, after numerous walk / trot transitions where he received lavish praise for his self control, we got back on track.

Just got in from my ride today, which was one of our most productive to date. It was very windy, the tarp canopies were flapping like mad, yet Val's mind stayed on me. I focused on breathing, from the minute I began grooming. Great warm up, smooth transition into contact, accurate school figures, supple, reaching horse. We had a few offers of the canter, but I schooled the halt / trot transition until we both got it right.

I had two revelations during this ride. One is, hey - shorten those reins! - shorter than you think you should, a little shorter. Give your driving aid, feel the reins elastically through your elbows (thumbs on top pointing to the bit) and then - you have contact. Val chewed the reins out of my hands while stretching long and low several times today. What an awesome feeling.

The other reality check was leg on does not mean leg on.... leg off... leg on again. Keep your damn leg on and aid from that position - don't remove your leg to aid - it really irritates your horse!!

My no one on the ground / without trainer status take on the canter-fest issue is... I definitely don't have the basics of the canter depart down. Some of it may be that Val is delighted to canter. I am as well, but we are restricted by occasionally deep footing and limited space to work in until my real arena is completed. (long story for another post)

Most likely though, I am inadvertantly combining / confusing / mangling the canter depart cue. One solution will be getting Val out to the beach and letting him rip - straight line cantering. Firm footing, no need to balance in tight turns, plenty of room. Possibly this weekend if weather permits and my riding partner can join me. 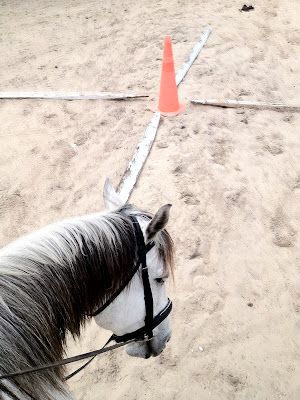 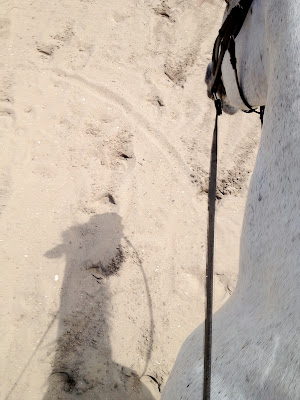 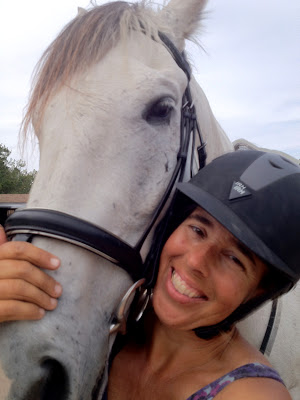