Settling up on some teasers from the last post...

Last week it was time to clean out the trailer, which had been serving as overflow hay storage. Val was cool and comfy, having enjoyed a post work rinse and a tasty grazing session. On a whim, I opened the ramp, placed a treat on the chest bar, threw the rope over his back and in he went, not a moment's hesitation. I've encouraged a self load or two after leading him in before, but this was the first time I just pointed him at the ramp and he complied. What a goooood boy. I love my horse. :)

The next day it was Cowboy's turn. Cowboy hasn't voluntarily entered a trailer since the fall. We believe some very bad trailer driving may explain his reluctance. His people schooled him furiously for a while. Feeding him in the trailer (without ever closing the bar), and chasing him with a broom were some of the strategies. Then they got discouraged and gave up.

It took about an hour, but we got him in calmly. No bribing, no head throwing, no bolting out backwards, no flying off the side of the ramp. Planting on the ramp was his evasion of choice. Out of respect for his owner, I waited him out with her, though I must confess, I finally shook a bucket with some noisy pellets in it, ending the session when suddenly he walked all the way up to the chest bar. Next session I'd like to turn up the pressure just a tad, get the butt bar up and take him for a very short, very slow, very safe ride, followed by excessive praise and lots of treats.

Cowboy's owner has been very discouraged about not getting to travel to lessons, or go to shows. She had signed up for several last year but didn't make it off island because he refused to load. I worry about emergencies, and Cowboy's well being. I think we're on our way to solving this problem - wish us luck.

I've learned some important lessons about gardening this season:

Leave half again twice as much space as you think you need around tomato plants, especially when planting in composted manure.

Even though you don't usually see deer until the fall, you need a very tall fence around the garden. Plan on it. When there is drought, the deer come out of the woodwork trying to find moisture. I don't even think it's about food as much as water.

The giant plants that result form the fab compost need serious support. Your run of the mill tomato cages are not sufficient. For next year, I am designing a model made from pvc that can be broken down and put up in stages. Easier to store in the off season.

No matter what you do, the majority of the harvest will come in at once. This weekend I will be processing tomatoes. All weekend long. 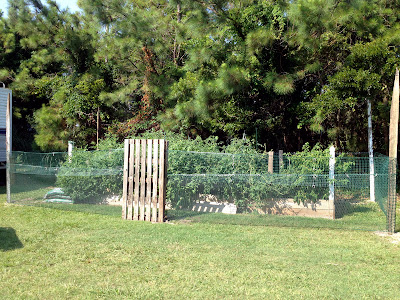 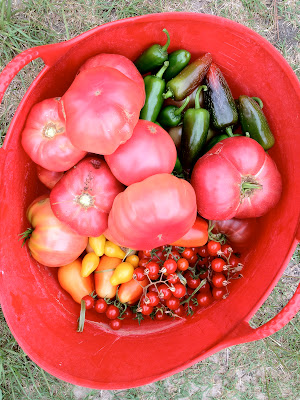 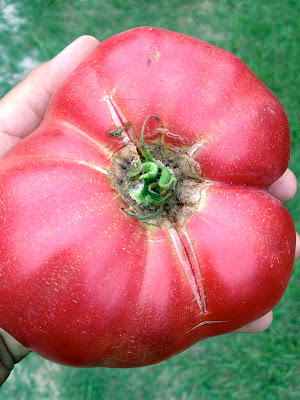 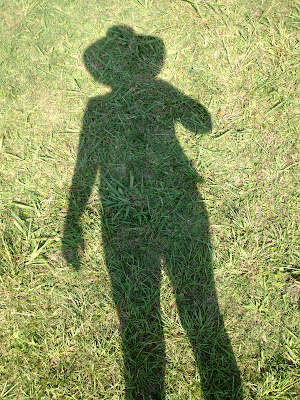 Deja vue.  The other day I brought a sheet in that had been drying outside. As I spread it out on the sofa, a wasp lurking in a fold in the fabric stung me three times on my left hand. My usual response to wasps in the house is trapping them under a glass and letting them out. This wasp ended up in the vacuum. Hello giant baseball glove hand.

The one bright spot was the next day, Val sniffed the sting hand all over, then licked and groomed it thoroughly for me, nibbling the super swollen back of my hand especially. I have no doubt he knew it was a hurt, and was helping.

And then there's snakes.

I'll have to tell a tale on myself. I found a rat snake under Cowboy's manure bucket. His people are likely to kill a snake reflexively, so I had the bright idea to relocate Mr. Rat Snake to my tack room. There is an obvious rodent issue lately. Why not let nature take it's course rather than resort to poison or traps?!

There's no need to be a smart ass though, by trying to multi-task while transporting a snake. The only thing stupider would have been trying to photo document the procedure as well. As I attempted to hold the snake in one hand, the feed bucket in the other and open the gate, Mr. Rat Snake saw his opening and bit the tar out of my thumb. I'd be lying if I didn't admit to having a fleeting thought questioning my snake id-ing skills.

Val was also interested in this injury, suspiciously sniffing the bite, then my arm where the snake had been wrapped, then the bite again, then the hay I was trying to stuff into his hay bag. I'm pretty sure he was letting me know that I better not be getting any snake juice in his dinner. 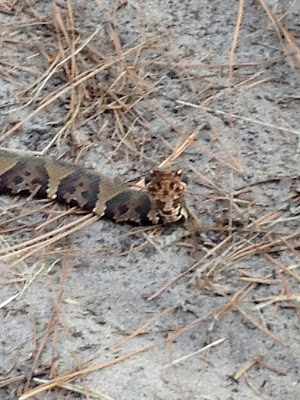 In the works - A CONTEST! With prizes and everything. Stay tuned - details to come...