Today is the first day in over a month that life has felt remotely normal.

Twenty four straight hours without extreme, catastrophic or just plain crappy weather will do that for you. A full day of sunshine with nearly no wind and a sound horse to ride will put a smile on your face. A sound horse who's been ridden exactly twice since February 10th.


We were on a roll until the series of misfortunes arrived, logging three to four rides a week with progress on forward into contact. Then came a turn on the mystery lameness carousel. Round and round between abscess or shoulder. Soak or no, bute or no. Sound or no. Nothing looked conclusive for over three weeks. Three weeks that insisted on raining (hard) and blowing (super hard) most of the time which made foot soaking and duct tape booting even funner than usual.

My farrier W finally made it out a week ago Friday - eight weeks since the last trim. I walked and trotted Val out for him before the trim. When we got to the LF, the situation became clearer. Under the considerable toe callus was a slim but nasty looking moon shaped bruise just along the white line.

Too long between trims left too long toes, white line stretching and flare. Perhaps the major sh*t fit (that occurred just prior to the lameness) resulted in the bad bruise. Persistently wet conditions didn't help anything. This scenario would explain why the soaking + poulticing + booting lessened the gimping but never produced the pu$$y hole I kept expecting to see.

From here on out, I will be touching up Val's feet every week or ten days. That way I can do it with the rasp only, and the adjustments will be so minor I won't be freaking out about upsetting the balance or screwing up too bad. W spent an hour with us going over Val's trim with me, and I made myself a cheat sheet from this great barefoot trimming site that It's Quarter's for Me and Memoir's of a Horse Girl have both recommended.

Friday was my first try and I felt good about the results. Val licked and chewed his approval. I will also be taking him out the the paved road for walks on a hard surface several times weekly. The sand arena is doing his feet no good either I'm afraid. At least now we have a plan.

Now, on to the other ongoing misfortunes. 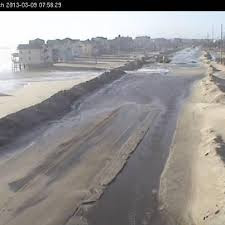 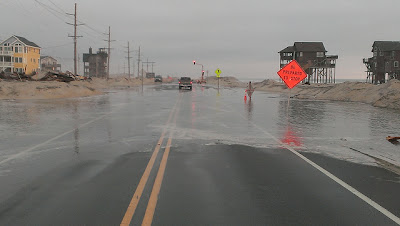 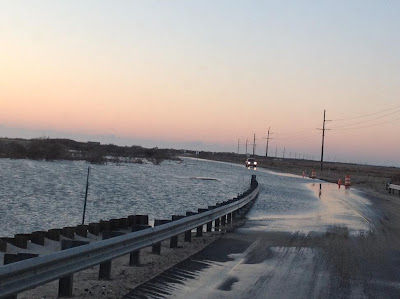 The accessibility of our little island has been severely compromised. Repeatedly. There have been numerous days every week this past month where the road north has been closed. Until two weeks ago the ferry off the south end hadn't run for months as the channel filled in. In other words, we can't reliably come and go. Neither can the mail, delivery trucks, tourists, the farrier...

I have had plans for a month to get my first lesson in over a year and a half today... There were technically a few windows this weekend where you could drive through ocean tide between waves. We're calling it the Soundside 500. So not funny.

Next post will positively highlight our most recent rides and my discovery of viewing ride videos frame by frame (!)  In the meantime the struggle to maintain a positive attitude continues...

[P.S. - Full disclosure - in the last post, the photos of the out of control horse were not of Val, they were lifted from google images. I was far too busy hanging on to him to whip out the iphone that day]
Posted by Calm, Forward, Straight at 9:39 PM
Labels: complaining about the weather, growing a pair and trimming my horse, the power of positive thinking