Guess what showed up at the farmette last week! A cowboy. A real live cowboy. A cow working, colt starting, boot, hat and spur wearing, knows how to use the rope hanging from his saddle horn yes mayam'ing cowboy from a ranch in Wyoming. *sigh*

The real cowboy's kid - a thirteen year old cowgirl - has dreamed of riding horses on the beach for her whole life... this summer they made the dream come true. After stops in South Dakota and Iowa for horse shows and to pick up grandma, they found their way here. Sounds good so far...


Background: the woman I bought my property from still owns the land next door. She had to move inland due to health issues, temporarily abandoning her small horse boarding operation. For the past year I have helped her keep the business afloat on this end. Taking bookings, maintaining the facility, sorting the customers out when they get here, often letting them camp on my property. Here's why - although I enjoy meeting the horses (and horse people), I'm planning to put an end to helping with boarding business.

Shortly after the boarder's arrival, we spent three hours in the boiling hot afternoon sun releasing their 25,000 lb converted semi + three horse slant with live-in from a soft spot in the sand where the cowboy had attempted to turn the rig around. We ended up creating a track with lumber that I luckily had laying around. A very labor intensive and sweaty job. (strike one)

And the picnic table I sat on for a few minutes while rehydrating was apparently infested with chiggers. The back of my legs are covered with scores of maddeningly itchy bites. (strike two)


At 9:30 that same night, I was well on my way to bed when a series of confusing phone calls ensued. My neighbor down the way from the farm called to tell me that the cowboy's elderly mother was lost in the neighborhood randomly knocking on doors. I tracked her down at another neighbor's house. She wanted to call the police because she was worried about her son and granddaughter not being back from riding. She also had no idea where she was - across the street from my farm, her son's truck, her son's cell phone, (and her son and granddaughter as it turns out). I talked her down, reminding her that the ride takes over two hours which technically gave them another fifteen minutes, and directed her back across the street to her son's truck with the phone and the living quarters where she could wait comfortably. I also wondered how the police could possibly help someone who has no clue where they are.

I then left a message on the cowboy's cell asking that he please call me to let me know he and his daughter had returned safely. I never got a call, so could barely sleep worrying that one of them was injured and they had to spend the night in the woods or worse. Why would you not carry a cell with you on a trail ride in a strange new place when it was likely to be dark before you get back? (strike three)

SO as much as I love sharing our fabulous trail ride to the beach  - I'm done with feeling responsible for people who don't / won't be responsible for themselves, no matter how adorable they are or how cute of an accent they have...


I took advantage of a beautiful cool day on Saturday to finally get a ride in. Still very very deep footing in our arena. There's a small area that is still somewhat firm, so we stuck to working in that limited space, at a walk. A delightful bareback ride. We worked on moving out, outside rein connection, halts and turns on the forehand. And me being even and balanced, keeping my weight down in my right side, not collapsing my left side. I thought from Val's responses, that I had succeeded in evenness, but the pictures tell a different story. :) 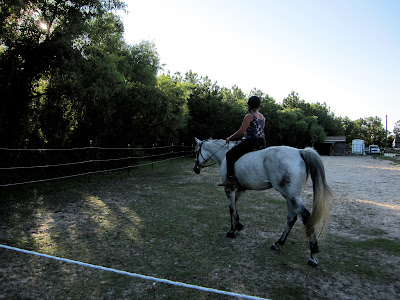 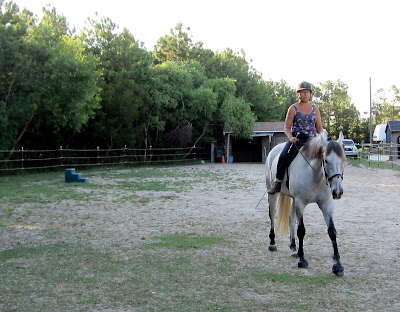 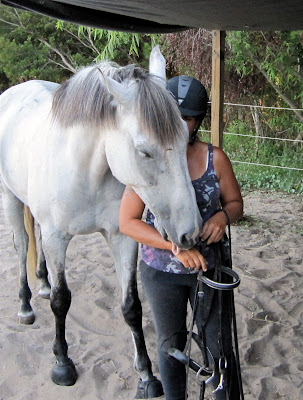 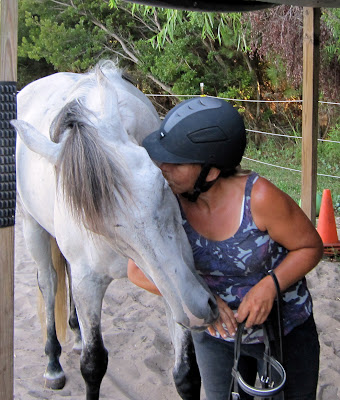 My poor grading / tractor man is recovering from double hernia surgery. He'll be out of commission for many weeks, so the new arena is on hold (again). We'll have to work where we can, and pray for rain. On a good note - over the weekend I got the trailer properly electrified. That just leaves bringing in h2o and connecting to the septic and then we're operational. On tap for the next few days - carrying the trailer contents to the dump + the very thorough cleaning. Stay tuned for pix...