Val is getting a heat + footing + busy-ness related break this week. I'm bummed. I really want to be posting about making progress with my horse. The way things are looking - riding time will be hard to come by for the next little while.

It's been too miserable to ride any time except the evenings. The arena footing is still atrocious even after our first decent rain came last Friday, which would have been cool enough to ride except it was pouring all day.

Our farrier got rained out on Friday, so had to cram everyone on the island in on Saturday. I think he was hurrying. Val and Cowboy were sore, and both of them complained during the trim, which doesn't usually happen. The part where W. uses the nippers seemed like it pained them some. He claimed that it was because of the rain, that their feet were soft. I wondered if one day of rain after over two months of no rain (in a sand paddock) would have that effect... I gave Val some bute that night and the next morning, but didn't feel good about riding him.

So instead of riding I took the tractor up to the farm Saturday afternoon, hoping I could drag the arena, and maybe compact it some as well, but (apparently) we need even more rain to firm the sand up enough - the tractor nearly got very stuck. To avoid having to pull it out with my truck, I had to rock the tractor back and forth for seventy five feet or so to creep over to the firmest part of the arena and escape. Fun. It was quite a sight. (and sound) Val actually left his shady hay sanctuary to check me out with curious eyes and ears. He could probably hear my cursing over the tractor noise. Yes, I am a potty mouth.

Along with visiting family obligations, the arrangements relating to with my future living quarters have occupied every extra minute since last week. However, there is good great news on that front. We moved the trailer to the farmette Sunday morning. Although fraught with snags, semi-emergencies and multiple last minute changes of plans - picture a combo of The Beverly Hillbillies + The Three Stooges and you'll be close. Only one flat tire. At one point I had envisioned a doomsday scenario of breaking down in the middle of our only highway, blocking all traffic and needing some type of major league equipment to clear up the mess...  No worries, we were ultimately successful.

Today I spent the entire day underneath the trailer (in the dirt) with jacks and large (heavy as hell) chunks of 8x8 shimming the trailer up for level and proper height for access to the septic tank - IMPORTANT! Thank goodness that task is done. I believe that the trailer's nickname shall be "The Shimmy Shack" :)

I am getting the sense that my control freak / type A / ocd tendencies are really going to be challenged through this moving / life change transition I'm embarking on. And that was an understatement :)


✿✿✿✿✿✿✿✿✿✿✿✿✿✿✿✿✿✿✿✿✿✿✿✿✿✿✿
I had a delightful visitor on my early morning dog walks this week. A sea otter. Otters are some of my most favorite creatures - in close competition with any type of monkey (primate)! ;) He seemed to be curious about me as I took these pictures, at one point coming within a couple of feet, standing up to get a better look. It was still pretty dark, so I'm super happy that any of the photos came out.

Otters are seem to be so happy. Even when they are doing their "work" - hunting and fishing, they find a way to enjoy themselves - indulging in frequent play breaks. Lighthearted and joyful - they know how to live :) 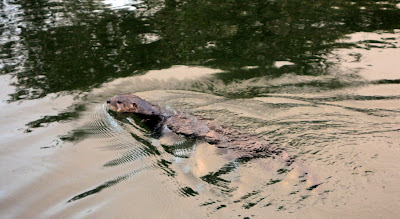