With the glorious weather still hanging in here Thursday, I was compelled to ride. Canceled an appointment, groomed and tacked, and away we went...

Nowhere. No go button at all. We argued about going forward, which direction to not go forward in, and ultimately which spot to refuse to go forward from. My recent strategy of skipping walk work and moving on to the trot was ineffective. Asking for the trot elicited a series of head shaking crow hops, with some dropped shoulder added in for effect. On a good note I stayed put no problem, and managed to run through my mental checklist instead of worrying into a fetal position.

My last few posts probably conveyed the sinister little undermining sense of disbelief I had at how well our rides have been going, for an extended period of time now, without a trainer. I tried to temper my enthusiasm, knowing that the pendulum would ultimately swing back the other way. Self fulfilling prophecy...

Yesterday was a day that I totally needed and missed the help of a better, wiser rider. I got completely frustrated at not being able to resolve the no go situation in a positive way, with a positive attitude. My mind went to that unhelpful place that predicts bad future events instead of being here now:

"If I don't end this ride on a good note, the sky will fall, and the sun will never shine again, and my horse will be broken. Waaaaa."

I dismounted. And quasi free lunged (chased him around waving my arms) for a few minutes, until I got control of my emotions, and he got with the moving forward program. Bingo.

Deep breath. He licked and chewed, I remounted, and we continued the ride. We did some nice big walking - best walk work we've done yet, he was covering ground. Then we moved out at the trot. I dropped my stirrups and rode on the buckle.*Val was super responsive to my aids. We ended on a very good note, as far as the riding part goes.

Now, here's the worrying part. As far the rider is concerned - I know that I struggle with being consistent in my aiding, with being even in my body, with not giving unintentional aids. The last few months suggest to me that I have become a more competent rider...

So what about Val? I believe his saddle fit is good. The sweat marks are always even and the same on both sides. My trainer inspected the fit and okayed it. Val doesn't react negatively to being saddled or to the girth being tightened. His mouth is great according to his natural balance dentist. He takes the bit willingly, and takes his time letting it go when we untack. He has been getting a nice foamy mouth lately, so I don't think there's a bit problem.

Could something be bothering him physically? He seems sound to me. I can certainly see when I'm not in the saddle that he shows no movement issues. Could he just be testing my leadership? Does everyone have day like this where it seems like they're going backwards? Should riding feel this hard - or more precisely, shouldn't it eventually feel easier?

I'll keep you posted. The dressage journey is nothing if not interesting and mentally engaging - resisting the urge to whine here - even more so when you're learning solo. :) 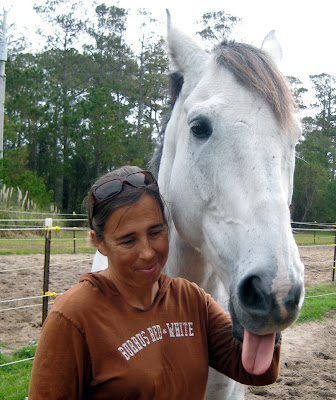