Olympic Dressage Freestyle - this is why I love dressage!

Yesterday the team dressage competition in London was decided with the Grand Prix Special. I am so happy to say that it seemed tactful, sensitive riding revealing happy partnerships prevailed, and was rewarded by the judges.


Here is a link to an excellent article from eurodressage critiquing a number of rides from the day, as well as detailing some welcome changes in the judging protocol established in London. Really good reading plus photos and a slide show of the special.

On to the freestyle...

I really really wanted to watch the freestyle rides live.

How much? Enough to blow who knows how much bandwidth. Enough to squint through suddenly pixilated screens while cursing random advertisements that popped up in the middle of rides I've waited the whole Olympic games to watch (NBC - you weren't hitting on much my friends) while sitting on my tractor in the hot sun. That's how much.

I caught the (new to me) Portuguese horse and rider combo Rubi and Goncalo Carvalho. A lovely ride - hope to see more of them in the future. Also my favorite Spanish pair from the 2010 WEG, Fuego XII and Juan Manuel Munoz Diaz. Sadly, I thought they lacked the fire that they had at the WEGs... and it seemed like the same or a very similar freestyle as the one two years ago.

I hope all is well with them - when they are on, you can't take your eyes off of them. (I think I am in love with the baroque type horses - yes, I'm sure I am. I want one.)


Steffen Peters and Ravel rode their last freestyle together, as it was announced afterwords that Ravel would be retired. It wasn't their best ride - Ravel looked distracted and made some uncharacteristic errors, much as he did in the Grand Prix Special. Peters stated how much Ravel deserved his retirement, that they owed it to him, but he was disappointed to have gone out with a performance that wasn't Ravel's best... 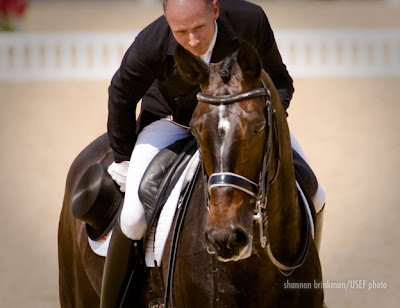 The British riders, much as they have been in all three equestrian disciplines, were the riders to watch. Laura Brechtosheimer and Mistral Hojris were relaxed yet powerful, Carl Hester and Uthopia had the best music and were the most in tune with it - they were dancing and so unified - a sparkling performance. They saved the best for last however, with Charlotte Dujardin and Valegro.

I will edit to post video as soon as it is available. If you were able to watch streaming video, you overheard Dujardin after leaving the arena, overcome and in tears. As she was hugged by her crew, she said how Valegro was so tired, so knackered was how she put it. She said he gave his best, he gave her everything out there, he left it all there in the arena, and that she didn't have the heart to use her spurs on him. That's what it is all about for me... horses, riding, dressage.

How privileged we are to watch, and experience, such sublime partnerships.


Edited to add - This is a quote from eurodressage's article about today's dressage freestyle:

"When asked why the Brit was first and the Dutch second, Stephen Clarke, president of the ground jury and kur judge at C, hit the nail on the head and showed that the judges look for what dressage is truly about. "The first two horses certainly were very close," Clarke said. "The impression we had was that Adelinde had huge power and expression and for us there could have been more lightness and self-carriage. The horse crosses its jaw, which took down the harmony mark a touch. Charlotte had more self-carriage, not quite as much power and expression in piaffe and passage. One had more power, the other more harmony and self-carriage. Our decision was for the harmony."

Still waiting for the inside the arena video to become available, but in the meantime...