Saturday arrived, chilly and windy, but still pretty enough. I traded (a steaming bowl of homemade tomato soup + grilled cheese sandwiches with avocado) for another set of pictures of Val and I working.

Val was much better about not locking on to the photographer magnet this time. Again, I let him tell me when he was warmed up. We worked on contact and some baby lateral work.

For the lateral work I aimed for zigzags down the long side - four strides lateral, two strides straight, four strides the other direction. I aimed to  influence Val's shoulders with my arms / the reins, and his haunches with my legs. I focused on making space - with the rein and my leg - on the side we were moving into, equal to if not more that asking him to move off the rein and leg we moving away from. Val was relaxed, seemed to enjoy doing something different and felt like he stepped over (or under) more than in the past. We finished off with some 15m circles, and trot transitions. 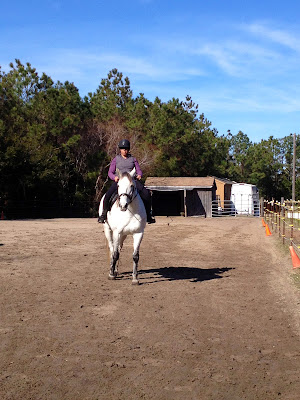 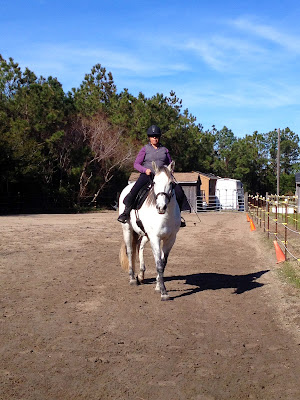 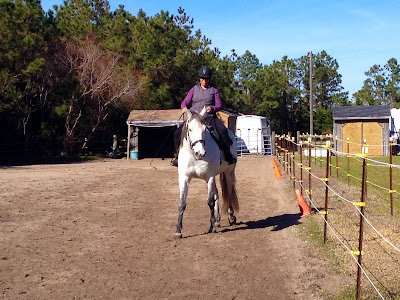 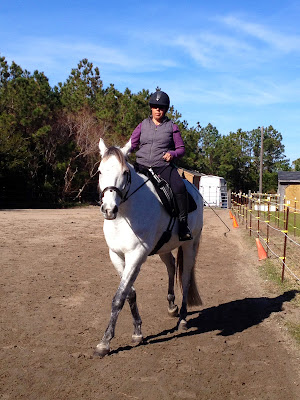 While there was improvement in the consistency of the contact, many pictures indicate no straight line from mouth to elbow - broken at wrist, as well as the ever present too long reins. And there are many shots which show me off to one side (left) in the saddle, but overall it was a very positive ride, and Val had some foamy lipstick when he received his post ride cookies.

Yesterday lucky Val got an extensive massage. He really leaned into the shoulder work, stretching his neck out, yawning, chewing and licking. I followed his long back muscles down to his favorite region, the haunches, which he presents to me almost daily for rubs and scratches, then down the backs of his legs. I needed a massage to recover from his massage (those are some big muscles!) but hopped on for an impromptu ride instead. I attached the clip on reins to the chin loop on his rope halter. This arrangement was less than ideal judging from the head tossing, so I put the reins on his neck, and worked from my seat. So - much - FUN! 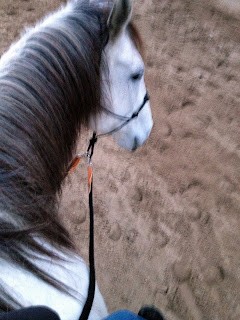 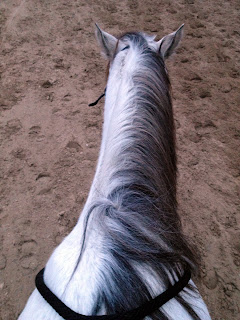 I have been meaning to post the story of Val's name. Today Kate at A Year with Horses and Annette from News from Aspen Meadows both posted about horse names and nicknames, so I'll gladly jump on that bandwagon.

Val's registered name is Sinister Wind. While I hate the sound of that name, it is very appropriate for where we live. Hurricanes... nor'easters, etc. I remember thinking it was a bit of a cosmic sign when deciding whether to purchase him.

His former owner recently mentioned that his barn name when they met him as a three year old was Marty. (thumbs down) His next name was Augustus, Gus for short. Changing Val's name felt wrong to me, but the only Gus I knew at the time was a big 'ol drunk who hangs out down at the docks muttering incoherently (when he isn't already passed out). A no go.

A deposit held Val for me over the summer after I tried him out - to let his girl ride him until she left for college, and to let me finish the preparations for first time horse ownership. I pondered the name change - uninspired - until a late night cable rerun... 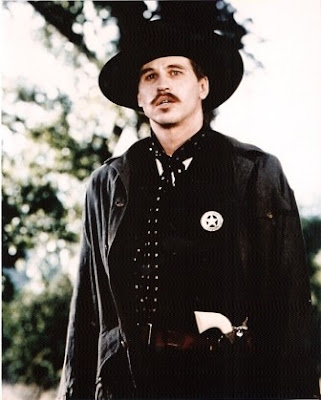 Upon reflection, I was thoroughly embarrassed about naming my horse after an actor crush. After a drug addicted, gambling addicted, tubercular gunslinger. Draw your own conclusions, but I'm guessing I'm attracted to the bad boys. ;D

It took me about two weeks to hit upon the (clever) idea of naming him Valentino, which would then allow me to call him ♡♡♡ VAL ♡♡♡ to my heart's content, and think secretly "I'm your huckleberry..." *sigh*

Turns out it was the perfect name... 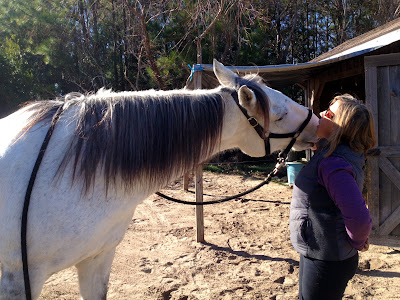