Oh, the weather outside is frightful,
But the fire is so delightful,
And since we've no place to go,
Let it snow, let it snow, let it snow!
Still waiting for the snow that's been predicted. So far only rain make that freezing rain and lots of wind. Grey horses do look fantastic against a white background...  I'm still hoping we'll get some photo ops later on this afternoon.
*************************************
I'm constantly amazed by how our horses communicate with us, and often wonder how frustrating it is for them that we (sometimes) take so long to figure out what they're trying to tell us. Just another testament to the generosity of spirit our horses share with us.
Before our last ride Val was rubbing his gums along my leg. That seemed strange, so I inspected more closely. I saw a tinge of bleeding, and what looked like some of his evening mash kind of collecting at his upper gum line. After our ride, I gently brushed his teeth with a soft brush. Then I made a saline solution, and used my dose syringe to jet it around where the bleeding was. I've done this every day since.
As I pondered what might be going on, I eventually remembered noticing that Val had also recently been biting his metal gate, chewing on his tack room door and doing some different, strange looking jaw stretching / tongue action. It suddenly hit me that Val's Nibble Net and the cold weather must be to blame. Because it's so cold, I've been cramming extra hay into the hay net - to the point that it's hard to get closed. The hay he's eating now is pretty coarse and more chopped than long and stringy. For him to pull it out through the small holes of the hay net he is abrading his gums on the webbing. 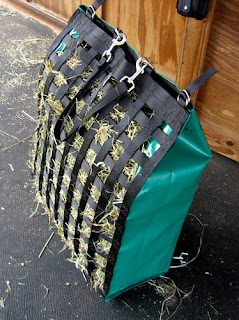 Besides treating his gums, which he totally cooperates with, I'm dividing his hay into two nets so it's looser and easier to get out. Obviously Val was trying to tell me something.

Lesson: if your horse suddenly starts up with new, different or weird behaviors, it is worth looking into. I feel really bad that he was suffering while just trying to eat, but I'm so glad he's smart enough to let me know. Interestingly, all of this went on at the same time as I've been working out scheduling with a new, natural balance horse dentist. Synchronicity!
************************************
As far as Christmas goes, suffice it to say that Val won't run out of treat options any time soon... possibly in this lifetime. He also got a heavy duty increased capacity storage container for his treat riches. (He got his main present a while back - a pair of Cavallo boots.) Actually, I noticed that he was sort of busting out of his back-up blanket as I tried to buckle it this morning, so some rationing will probably be necessary.
Due to Christmas meal preparations, we missed out on a great day for riding yesterday. Next year we're doing a Christmas Eve dinner instead! Luckily we're expecting a number of pretty days in a row with temps in the 50's this coming week - more like the usual conditions here - so Val and I can work off some of our holiday indulgences. Hope you all had a wonderful holiday - we sure did :)
Posted by Calm, Forward, Straight at 12:55 PM
Labels: communication, hay, natural balance dentistry, nibblenet, weather