Not my favorite way to spend an afternoon...

I haven't posted before today about my other animal companions. I only recently added some pictures in the sidebar... feeling guilty that Val gets the lions share of time, attention and resources now.

After stacking firewood in the backyard this afternoon I thought to check if there was any progress in my winter garden; several raised beds that surround my back deck. I looked up from my inspection and was startled by the sight of Max, my handsome, formerly feral, grey garage cat. It was so odd. He was laying out on his side, exactly how you would find him on a warmer day, sunning in his favorite spot. Only he was way too still. Stiff in fact. And it was barely above freezing.

I checked him over thoroughly and found no signs of distress or injury. He appeared to be completely relaxed, eyes open and clear, but dead as a doornail. I wrapped him in an old pet blanket and buried him under a little cluster of oaks in a sunny part of the backyard.

I found Max almost exactly nine years ago, huddled under some shrubs that I was pruning. Before I thought about it hard, I had snatched him up. A tiny feral stripey grey kitten. I tried to store him in the truck but my dog Sweetpea thought he looked delicious, so he spent the rest of the day in my sweatshirt.

He grew up to be a skilled hunter, often snagging his prey in mid-air. Unfortunately his prey was often songbirds. He was especially fond of cardinals - he caught over a dozen during a hot streak one autumn. (sorry cardinals!) I never put out bird feeders again since I had him... it hardly seemed fair. Most of the time all that remained was a pile feathers and the occasional birdy foot.

Max was never completely domesticated, although he would let me grab him up and love on him. Whenever I spent time in the yard or worked in the garden he was my little shadow, especially when I hung sheets up on the line. One summer I couldn't find him in advance of a rapidly worsening hurricane. As soon as I could after the storm I went searching for him, fearing the worst. Local cats are often drowned in rising tidal waters as they take shelter under buildings. I found him way up in a cedar tree, higher than I could climb to retrieve him. He climbed down and jumped into my arms when I called out to him.. I believe he was never so glad to see. I installed a cat door into the garage the very next day :)

Apparently he didn't suffer... at least I know what happened to him... and the ground wasn't frozen. For those things I am thankful. Bless your heart Maxie  - we'll miss you. 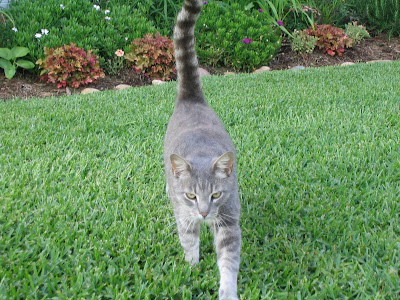