Why I fell in love with my horse...

In honor of Valentine's day, Jane at The Literary Horse suggested folks should blog about their horsey love stories. What a great idea, especially since I don't have a valentine of the human variety at the moment :)

Why did I fall in love with my horse? Good question - it was not love at first sight. I tagged along one weekend to another barn to watch my trainer give Val and his owner one of their first dressage lessons. He was a cute ottb to be sure, good size, although I didn't really want a grey. He was hunter / jumpery, and moved decidedly on the forehand. He was well put together, seemed to have a mellow attitude and had been very well cared for. Plans were made for a test drive - ring work + a mini trail ride - and then negotiations began. And ended in just a few minutes. My overwhelming feeling was if I pass on this horse he'll be gone. No lightning though. No emotional connection at all. Against my better judgment I bought the first horse I looked at.

Two days after picking Val up, we were off to Maryland for a five day clinic with Erik Herbermann. The clinic had been planned well before Val came into the picture, and I convinced myself that taking a new horse on a six hour trailer ride (my first) to a clinic (my first) was an okay idea. Truth be told I was absolutely petrified - to the point of almost getting sick right before my first ride. Thankfully Val behaved beautifully, and in retrospect it was a great way to start off our relationship.

Our first few months together went smoothly. I got used to the routine of caring for Val. He got used to a new living situation. We trail rode out to the beach, Val's first time seeing the ocean. He was perfect :) Then I did something totally stupid. In an effort to address some weight loss, I put Val on a supplement called Amplify. So not necessary. I didn't see weight gain but I did see a change in temperment, and it wasn't good. Not long after, we had our disastrous, bolting, sky high bucking trail ride, where I employed an emergency dismount as well as hit the dirt super hard - without a helmet. I got back on and rode before I called it a day. But I was decidedly not in love with Val. And I had seriously damaged his confidence in me.

Over the next several months I avoided riding. I questioned why I ever got a horse. Who did I think I was, that I could handle an ottb. Who did I think I was that I could even ride. When I did get back on, we had so many arguments. I couldn't steer him - at all. I couldn't get him to move. I was so scared of my horse... and I'd deal with it by getting mad. Val tested me on everything, and it was so frustrating! Until I finally decided to get my act together. A conscious decision. Part of the solution was getting Val to respect me, part of it was resolving to respect Val.

When I stopped treating Val like an adversary, he stopped acting like one. I discovered his soft side. And his sense of humor. His habits became endearing, like how he always tries to eat his reins, or the lead rope, (or whatever he can get into his mouth)... and how when he's really content he'll gently groom me, top to bottom. *Sigh*

Little by little, one tiny step forward at a time, we became friends... then partners. We became more confident, and more confident in each other. I firmly believe you get the horse you need, even if you don't realize it at first, or need a lot of convincing ;)

We're in really good place now, and without a doubt, I LOVE my horse. A lot. What's not to love ?! 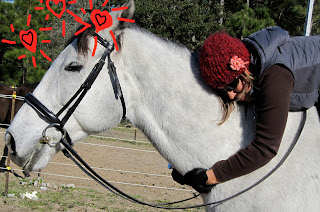