Yesterday afternoon during my visit to the barn for midday cool rinse + watermelon break, I noticed some pretty major swelling in Val's right hind lower leg. Bummer. It was all the way around his fetlock, down into the pastern and above the fetlock for a few inches. It was pretty warm, and the swelling was firm, even tight, feeling. I cold hosed, and got Val to stand in a bucket of nice cold well water for about fifteen minutes. He also got 2g of bute. 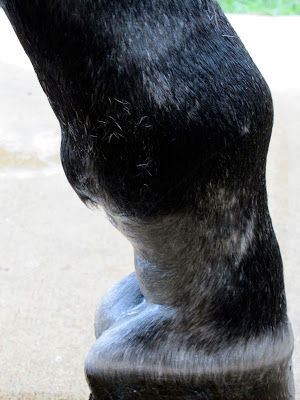 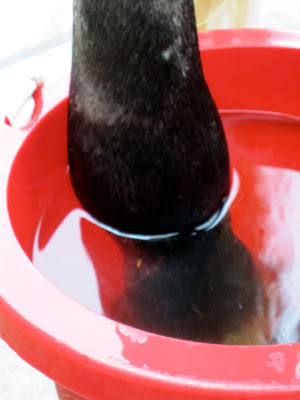 Early this morning, the swelling wasn't any better - in fact it was possibly a bit worse. More bute, and I rushed up to the barn as soon as I finished work. This time I took some of those flexible freezy bags, and polo wrapped them around his ankle. While he chilled out, I groomed, trimmed and clipped. Then I compression wrapped the affected leg, all the while wishing that I had practiced this skill prior to needing it, but I think I did an okay job. 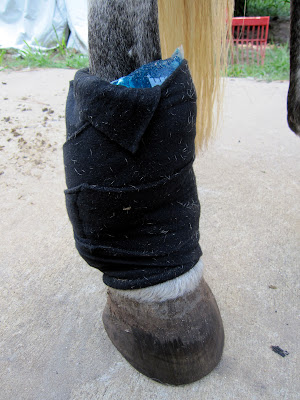 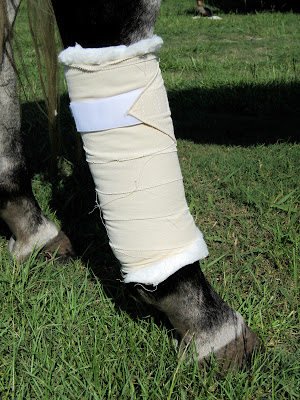 We trotted out on level ground to check for lamenes, but I couldn't observe his movement very well while leading him. I need a helper. However, he didn't appear to be off. Also checked his pasterns to be sure they were still at the same angle - check. Big sigh of relief on that one.

Stomping flies (they are ungodly bad right now)? Torquing leg in the #^*$%*#@& deep sand? It certainly isn't a result of too much work. Let's hope the swelling has gone down tomorrow morning, otherwise we'll have to plan for a trek to the vet - an all day affair.

Besides, it's better for everyone involved (Val) if we limit the bute consumption. It results in such drama.* One could almost be convinced that poor Val will never again enjoy his most favoritest horse cookies. Or even the humblest bowl of horse chow for that matter.

After this mornings dose, Val took issue with my having loaded the hay bag with the same hands that touched the dreaded bute tube. He proceeded to deliberately sniff the freshly loaded nibblenet all over. Then he sniffed my hands, sniffed the bag, hands, bag... finally he delicately lipped out about three strands of the offending hay, spun them around in his lips a few times, dropped them on the floor and stepped on them. Another round of sniffing - hay, hands, hay, hands... big sigh.

I read you Valentino!

*(drama was significantly milder (disappeared) when delightful grazing was offered) 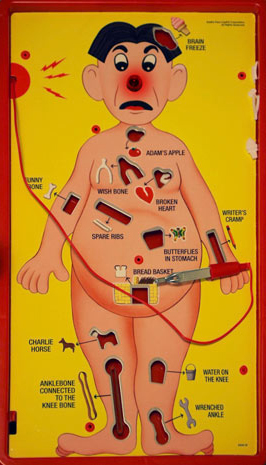