It's been three (long, hard, hot) weeks since we lost Sweet Pea. The household is adjusting to her absence - some better than others. I've finally stopped expecting to see her when I come home.

the entire sofa
no competition for food, real or imagined
longer, speedier dog walks and more of them...

If she could talk she would be saying, "Mine all mine!"

Then there was the renewal day for our boarding contract. The day after I put my dog to sleep. Boarder Mom took exception to abiding by the terms regarding giving notice. I offered to compromise by halving the notice period, but requiring payment up front for the remainder of the time, as well as notice in writing. BM refused to (re)read the contract or comply, and tried to argue with me about why she didn't owe me notice or money.

When I didn't give in, the situation escalated into an ear load (mine) of cursing and nasty personal insults. On my front porch. On my property. I had enough, and gave BM 24 hours to get Cowboy and their belongings out. I believe she was a little surprised completely shocked that I called her bluff. Best of all, I did not say or do anything I regret - which is an eff-ing miracle. I will miss Cowboy and his girl, but not pushy BM or having to beg for my board every month. The peace and quiet, the utter lack of drama at the farmette, has been soothing.

Losing the boarding income is daunting, but once I factored in having my second storage shed back, which is now filled with enough hay to last until February, it was easy to justify the loss of boarding income. Amount boarders owed = price of a new shed. :D

Even more than the financial implications, I was concerned about how Val would handle being a solo horse again. I'm not ready to add to the herd just yet, although that is the eventual plan. No worries about my darling Val. He has been super relaxed since being on his own.

He lays down to sleep every day. His vigilance while out of the paddock is minimal. The last time I took Val to the boarding property next door, he ran himself into a complete lather and acted ridiculous, responding to Cowboy going to crazy town, screaming from his paddock. Yesterday, we walked over there on a totally loose lead, his head down, following at my shoulder. He calmly investigated the area before rolling and having a good graze while I cleaned up after the horses that stayed over the weekend. Like night and day.

The footing in the arena is unsuitable for work again - deep and soft - so today I lunged Val out in the open, in the scary back of the property (site of future arena). It went very well. Val focused on me and gave me an energetic over-tracking walk. I'm going to set up a rectangle with cones and start riding out there this week. We've both lost some condition over this long summer break, so we're going to come back into work slowly. Shorter sessions, more often.

I have gotten a number of rides in recently. All bareback, several with no tack at all. SO lucky his back is comfy. One ride was on the spur of the moment after a lingering scratch / massage session, where I climbed the gate and hopped on barefoot (no helmet either - I promise I'm not making a habit of it). I got the urge to act like a kid on a pony, and followed through. We did some nice turns on the forehand. It was relaxing and fun for us both. The only bad thing that happened was when Val turned around while I took a picture and put most of my foot in his mouth. What a hoot he is.

Stay tuned for - our first real trim (by me), we are what we eat, and yet another snake encounter (!) 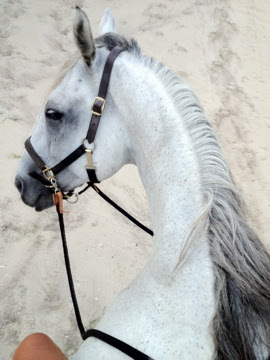 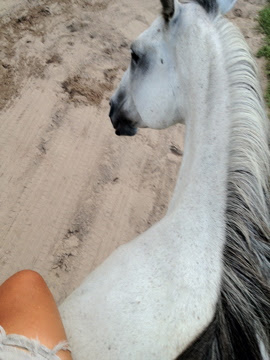 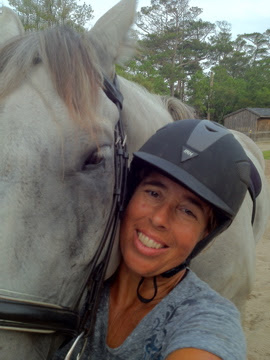