It's time for Val's monthly Adequan injection again, a maintenance dose for an old hip issue. 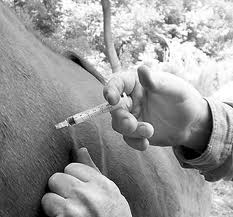 Near as I can tell from his scans (nuclear scintigraphy) it's where his gluteal muscle attaches to bone - at the third trochanter - and involves the flexing of his hip joint and movement of his (left) hind leg. At the time of his initial treatment he was having trouble swapping his leads and acting uncomfortable approaching jumps with his previous owner. It remains to be seen whether our work together will ultimately be affected...

Anyhow - Adequan not being inexpensive - I researched sources extensively. Recently I found out that there is also a generic version,  Acetyl-D-Glucosamine, which is substantially less expensive, as in the cost for 50ml is the same as for 5ml of Adequan. The only study I could find about one versus the other claimed that the generic was less effective. This study was funded by the makers of Adequan, Luiptold. (Please don't even get me started talking bout pharmeceutical companies and proprietary rights!) The person who told me about this generic said she gets it from the compounding pharmacy US Compounding. She felt that even if the generic were somewhat less effective, the huge difference in price would allow for latitude in frequency of dosing. I asked my vet and they said they had not tried it so far.

I'm considering trying out the generic if I can, but in the meantime, since I recently filled my current prescription I'll stick with the Adequan. Maybe the much higher price is due to the super cute little huggie they sent with the bottle?? 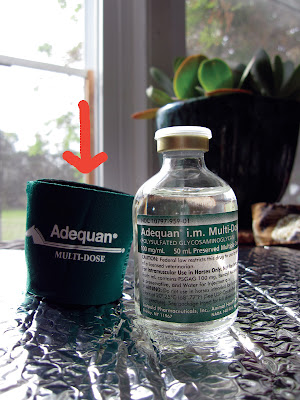