So - a month ago, I bought thirty five bales of hay to get me through the winter. Pennsylvania orchard grass. Great big bales - still fairly green. Very very heavy bales. Loading and stacking this hay (by myself) completely wore me out. And it wasn't cheap.

I should have known something was up. When Val, the equine vacuum cleaner, did his taste test he was ambivalent about it. At the time I thought it could be flavor shock as he had been eating a tasty rye mix for a while.

This week we were nearly finished with the sugar hay - decision time... I got cold feet. I asked around and did some research, but was still confounded.

The facts:
The PA hay let out a poof, had an objectionable smell, was really heavy, and my horse wasn't super excited about it. When I originally went to pick the hay up, the bales were stored still strapped into even larger bales, not conducive to air circulation. I didn't see any active mold, but the poof was suspicious. Smoky, light, floating dust... and I hated the smell (chemical-ish). I wondered if it could be the hay drying agent (propionic acid / sodium diacetate). An article in thehorse.com claims that hay preservatives are safe.

Back at the ranch... I heard that someone else returned some of this hay for mold. One of the bales I broke open was warm in the middle, so I called a horse friend (not as picky as me) to weigh in. She thought the hay was fine although it smelled funny. She bought it from me for a thirty percent discount. Am I crazy?

Most of today was spent driving (six hours round trip) to a different hay man's farm. He had a beautiful just baled orchard mix for a decent price. Now there's enough hay to last through mid February. Trying not to dwell on the lost money, time etc. Nothing's to good for my guy ;) 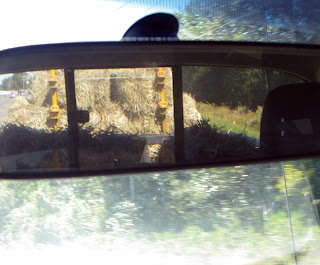 Friday made four rides in seven days. Each ride improving on the last. We're going to try working in the newer (non-fenced) arena tomorrow.