Val and Will have a "come to Jesus meeting"...
Tuesday was farrier day. Coincidentally, it was also next door neighbors having target practice day. (again) Both of the horses were just a little jumpy.

Well, Val was a lot jumpy. He had ants in his pants, was swinging his head around... generally there wasn't a chance he was going to stand still. Will (my farrier) asked if he could have a moment with Val. Although I would never be as strong with my horse, Will's cowboy style release the feet / yield the hindquarters session a la Clinton Anderson - (isn't he the cute little Australian horse whisperer?) - was successful. Val's trim was speedy and calm.

While it's doubtful I'll ever become a Clinton Anderson acolyte, I did realize something really important, and it happened because I had the opportunity to observe someone else working with my horse. Even though I could get my horse to back up, halt and yield his hindquarters, with no halter or lead rope (or fancy stick), he wasn't always responding to me immediately. I believe there were doubts about my leadership...

With Will he responded right now. He was paying attention - his eyes were on Will at all times. For me there has often been just a bit of a delay, which I believe Val interpreted to mean that everything was his idea. More importantly - I have allowed these lapses to accumulate, and then when the pressure is on, we get wiggly, head swinging, hard to trim horse.

The next day I took Val out to graze for a while, and did a gentler version of the previous days lessons. Gentler, but with sharp timing. He responded beautifully. Once again I was reminded that the release is the reward. And as my trainer likes to say... you have to have a mind like a steel trap.

That is a tall order.

The "come to Jesus meeting" bears fruit...
Today I set aside most of the day for riding and barn work. While Val had breakfast I replaced the (crappy) cross tie setup on my wash rack with nice new hardware and lead ropes so we now have the quick release option. Safety first :)

After breakfast and grooming we rode. My game plan for the ride consisted of keeping Val moving his feet at all costs. I chose the number of strides and halted when we got there... gradually increasing the number of strides. At first, I didn't worry about steering, and we worked on the buckle. I also played around with how much leg I was using. Not heel, not active aiding. Leg laying on horse.

I have apparently been far too light with my lower leg. When I got it right today, the quality of Val's walk improved drastically and immediately. And I felt an opening in my hips. And he began to reach. (light bulb turns on here, accompanied by heavenly chorus) I took up some contact and added turning to the mix. Eventually Val seemed to sense when we reached the chosen number of strides and was halting off of my seat only. Despite many distractions I had a relaxed and attentive partner today. What a good boy! 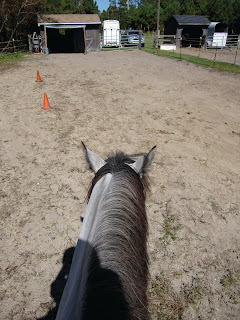 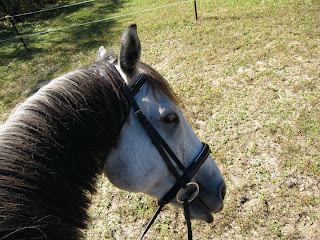 Clean as a whistle...

After our ride we had the last bath of the year - only cold well water available at the barn. I did let a bucket heat up in the sun so we could demo sheath cleaning for my boarder. I must say - for a barely turned teenager - she was unfazed by the process, as was Cowboy. I'm very impressed with both her maturity and her horsemanship. She has plans to become a vet - I'll bet she succeeds. 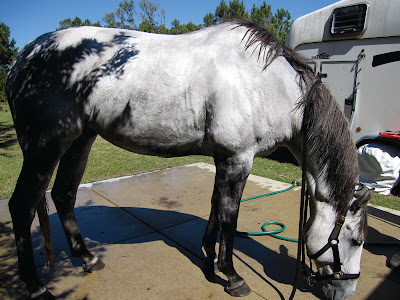 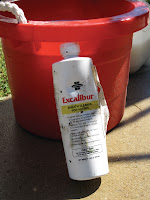