Long string of bad weather here. One dry day since last Saturday. More on that later... 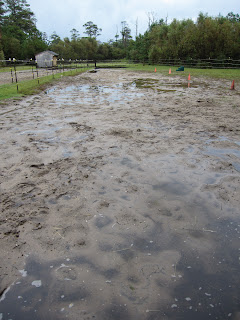 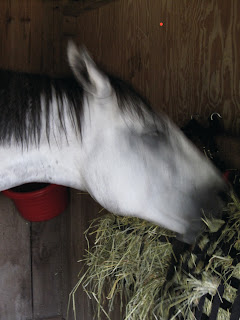 Happily, Val and I rode yesterday morning. We warmed up and worked on transitions, turning, and turns on the forehand, utilizing the cones I have had set up for the last few weeks. Nothing new, but it went smoothly. We had a nice, calm, effective session. The wind was whipping from the north bringing the coolest temperatures here since the spring. Oh, and black powder (hunting) season started on Friday. Val took a few sidesteps but I kept him (myself) focused pretty well.

Might be to soon to predict, but it looks as if the horses are not as worried about the nearby hunting activity as last year. It's not just the surprising gunfire that bothers them - it's the people sneaking around in the woods surrounding the property. Apparently most hunters are not quiet enough to sneak up on horses - the horses always know.

With all of the potential for scariness, I probably would have been hesitant to ride on another day, but it had been a quite a while and who knows what this week will bring.

I was kicking myself that I didn't bring the camera on board for this ride. Frankly, I don't need something dangling and swinging off of the saddle to add to my challenges with coordination and concentration... It would have come in handy though, when, while halted next to one of the cones, Val decided he needed to sniff and taste the cone... pick the cone up... swing the cone to and fro... side to side... throw the cone... punctuated by sidelong glances to make sure I was paying attention. If anyone was in earshot they probably thought I was losing it. Mind you, the cones have been in Val's space for weeks now, and haven't budged. Up to now, he has shown zero interest. Using humor to avoid work - a temporarily successful strategy :) 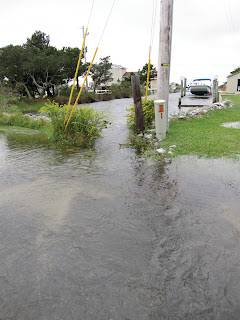 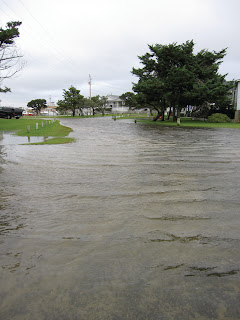 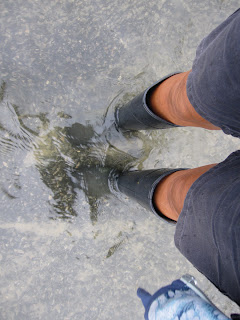 Back to the weather. We have had, depending on who you talk to, one tropical storm and three sub tropical low pressure systems since last Sunday. The upshot is at least 12 inches of rain, many roads covered with salt water, 20 - 30 mph winds daily and 50 - 60 mph wind gusts, and today several feet of sea tide that no one predicted. I happened to look outside this afternoon and see the road disappearing, so I rushed up to the barn to feed an early dinner while I could, and left my truck on high ground in town. I sloshed back home and took the girls out for a dog walk/wade. 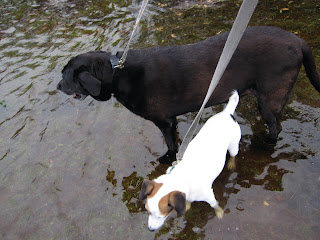