Why I love thoroughbreds... 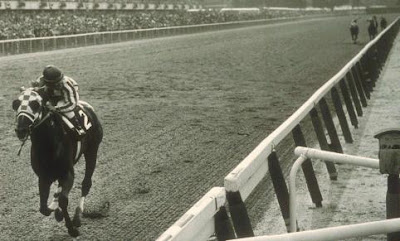 It will probably be a while before I see the new movie about Secretariat. One reason is that our movie theater is closed for the season. The next nearest movie house is a three hour round trip, so I'd have to make a whole day of it...

Boy do I feel sorry for people who weren't around yet to witness Secretariat's other-worldly performance that day in 1973. I have no recollection of watching horse racing before that summer when I turned nine years old. Apparently, by the time the Belmont rolled around with the possibility of the first Triple Crown winner in twenty five years, the entire nation was watching.

My whole family were gathered in the very Brady Bunch style family room around the television, as we had been for the Derby and Preakness. As Secretariat flew past Sham opening his lead up to THIRTY ONE lengths, running each quarter faster that the last, moving like "a tremendous machine" - all of us were jumping up and down, screaming at the top of our lungs and simultaneously sobbing uncontrollably. All of us. It was that special. Even as a child, I knew the import of that event. That I was seeing something that would likely never happen again. We were sharing a shining moment of perfection.

And I knew that I was in love, I knew what I wanted to be when I grew up - a jockey - and I knew I wanted riding lessons more that anything. I had already read every horse book in my local library, and was on the way to memorizing much of the pony club handbook. I had a modest collection of Breyer models which I brought to school for the recess horse shows... where she who had the newest Breyer horse was the q-u-e-e-n of the playground. I was horse crazy. The Belmont sealed the deal for me - I didn't stop begging until I was on the back of my first lesson horse - Pork Chop Sam - a big chestnut with white socks just like you-know-who.

It will probably be a while before I see the Secretariat movie... maybe when it comes out on dvd, so I won't be embarrassed when I get very emotional. I haven't successfully watched the video of the '73 Belmont without choking up yet. I doubt I ever will :)