My favorite ride of the WEGs

Juan Manuel Muñoz Díaz and his amazing PRE Fuego XII did the most beautiful, electric and correct (to my eyes) musical freestyle at the WEG just a few minutes ago.

High point: A set of (one handed) totally in time to the music one tempes that blew everyone away.  Lets just say I might have scared my dogs off the couch with my cheering!!

The freedom of movement in their piaffes, passages and pirouettes weren't matched by any of the competition, not even the mighty Totilas. No thrashing tail. Front and back halves connected at all times lol. He was always at or slightly behind the verticle but I'm guessing that has more to do with being a baroque type of horse than the way he was ridden. As Diaz saluted at the end of his ride, the crowd reaction was so explosive that Fuego half reared, almost unseating him. Classy, beautiful pair. A pleasure to watch.

He received an 81. something - fifth place score. I suspect that breed discrimination - Fuego not being a GIANT warmblood with a HUGE extended (expensive) trot as many of his competition are -  probably had just a bit to do with it if the commentators were any indication. When his scores were posted, the crowd booed loudly and disruptively... surprising at such an event -  but I wholeheartedly agreed.

Can't wait until the video is available :)

Edited to add photos and quote from Dressage - News: 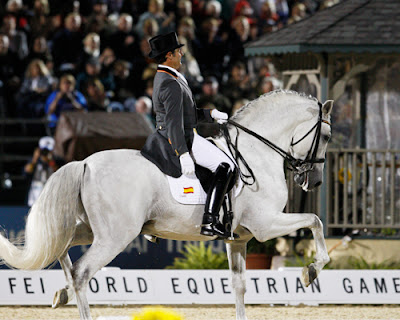