In the Arena # 114 - First ride after the trim, first bath of the year, more proof that me and videos are incompatible, + one happy accident. (or how do I love thee, let me count the ways...)

Another good ride with the new tack, and another breathtakingly beautiful day. Sunny, perfect temperature, Carolina jasmine blooming up a storm and the Osprey couple that returned last weekend were wheeling around loudly calling out suggestions to each other about this year's nest site.

Val seemed a tad mincy from the trim yesterday, so I planned on keeping it to a walk. We did a lot of on the buckle work. Took up contact, and once again, keeping my thumbs on top of the reins and pointed toward the bit resulted in good arm form + immediate reaching into contact.

We flowed around working on our big walk - with Val stepping up under himself - using cones for the patterns. It really helps my steering, and my addled mind, to have a visual target, so the cones are great. I focused on the timing of my leg in asking for the inside hind to come under. I aimed for just before it left the ground.

At this point Val seemed okay so I asked for some trot. He was slightly short strided at first, but this improved within a few minutes. I spent some more time focusing on staying super balanced through the turns and corners, and got more improvement in lugging and stalling. I must remember to sit tall and straight, ie no leaning into the circle or in the corners. We are making slow, but sure progress. :)

After riding, we finally washed off the accumulated winter filth, and for one brief, shining moment. my horse was clean. Sparkling clean. He was so l-o-v-i-n-g it, even asking for his head to be soaped up and rinsed. I scrubbed him within an inch of his life. 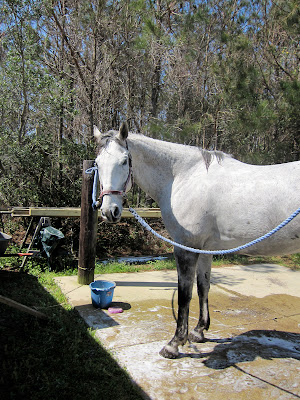 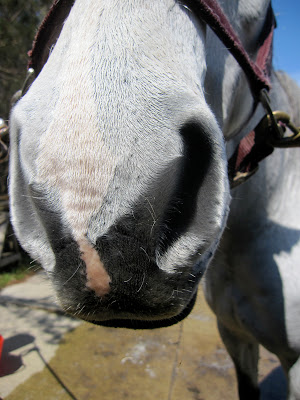 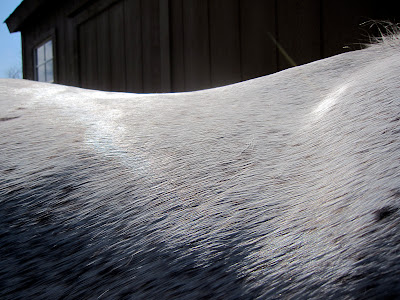 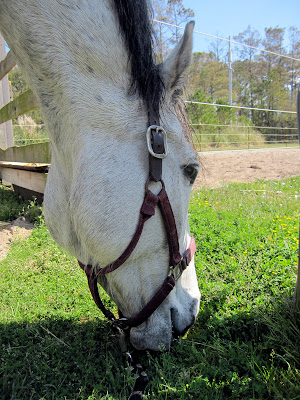 We air dried while grazing, which made poor Cowboy so jealous, he nearly exploded in fits of frustrated lip flipping. I thought I videoed that cuteness, just like I thought I videoed some of our ride. Nope, when (due to a combo of polarized sunnies can't see display screen + stubborn videographer not acknowledging the need for actual glasses) the camera was on, it was actually off. When I turned it off, it was actually on. (imagine lots of cussing) I did manage to catch the first thing Val did when I turned him back out...


I also (sort of) videoed was Val's new found love for the Kubota. Now, whenever I drag the ring, he deposits himself in my way, refusing to move, and nosing around on the tractor, located mere inches away from his feet. I believe he reckons it's a super large version of the clippers. The little clippers feel gooood on my muzzle, maybe the giant orange machine will feel really good. [ Note the mad skillz - who can be bothered to remember that the camera must stay horizontal. Not the first video fail for me...]

❋❋❋❋❋❋❋❋❋❋❋❋❋❋❋❋❋❋❋❋❋❋
Wherein my horse tells me what's up the best way he knows how...
So - yesterday evening as I did barn chores, I noticed Val reaching his head around to his left hind, which he was holding up in the air. I have seen him do this a few times recently, and because of his hip injury it's hard. Usually I figure it's a bug bite and offer to scratch.

A few minutes later, he was holding the lh up really high under his belly, stretching it forward and looking distinctly uncomfortable. Like it was stuck. Oh heck - has he done something to his stifle? Is that why he felt stiff under saddle this morning? I flew into a panic... time for an inspection!!

I started massaging the front of his stifle. The look of pleasure from Val was immediate and unmistakable. He closed his eyes, stretched out his neck and both his lips began trembling uncontrollably. As I looked more closely, with my head stuck up in his area, I found three ticks attached to his inner stifle, one of which was terribly swollen. I picked off the ticks. Then I scratched some more for him. He looked like he was going to pass out. His nose hit the electric fence twice. Pure pleasure lol. I applied some Veterycin (holy water) to the bites and we were good to go.

Oh - still working on the cliffhanger post...
Posted by Calm, Forward, Straight at 1:57 PM
Labels: baths, cones, position, sparkly, telling it how it is, trotwork, uncoordinated