In the Arena # 115 - Forward is forward, and no such thing as too many treats!

The unseasonably warm weather has pushed my landscaping  / farmette schedule forward by several weeks. Everywhere you turn there are chores to do!

My electrician is scheduled to come this weekend (!), and I've got more garden to put in, so opportunities to ride may be limited. So far the sugar snap peas, radishes, carrots and leek seeds are planted. I discovered six pepper plants that overwintered hiding under the wretched mat of weeds I had to remove from last years beds. I must confess that after the hurricane, I was disgusted with gardening and neglected the beds all winter. My prize for the arduous weeding sessions was finding these established peppers.

We've snuck in two rides this last week. Responsibility to work or to riding - seems like an easy choice - but it's not.

Ride one. After a nice warm-up on the buckle, I focused on getting an immediate response from the smallest aid possible. I hope I'm not imagining that this phase of the ride is becoming briefer and easier. But still necessary. Forward into contact just won't happen without my addressing how Val responds to my aids at the beginning of the ride.

Next we worked the big walk, timing of that aid, and got some nice baby leg yields as well, which makes walk work less boring. I was reminded (once again) that when I give the leg and rein aids that I wish Val to move away from, I must also give him space with the opposing leg and rein - space to move into. The space is slight, and I find each ride I can make it slighter. Maybe one day it will just be the idea of space.

I also chose to focus on the quality of my contact - steady and following, which equals reliable, to Val. We proceeded on to trot transitions. Things were going smoothly when invader cat chose to have some sort of loud attack in the woods beside the arena. Val spooked slightly. I asked him to go back to work, and tried not to pay attention to the cat noises. Val requested that we work in such a way that he could keep an eye on things. He asked politely, and I thought it a fair request, so I arranged the figures to accommodate him. He thanked me by getting right back on track. Teamwork. 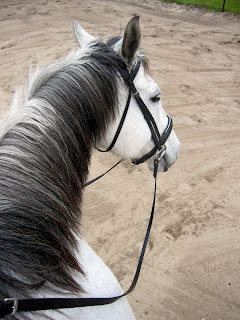 After the ride I marched Val right out the front gate and took a trail walk down the beach trail. Not super far - due to clouds of mosquitoes, but without hesitance on Val's part. He was with me 100% despite the fact that Cowboy was screaming his head off and running himself into an absolute lather. Val's response was minimal. I turned him out into the property next door, which I care for and which has some decent grazing. He did a few maneuvers, left some impressive divots in the paddock, but again he came right back when I asked for his attention. What a goooood boy! 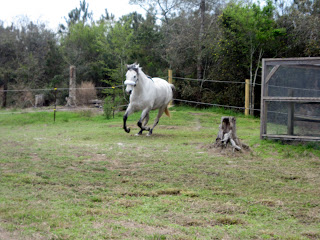 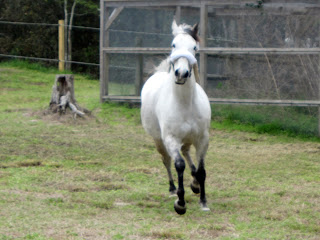 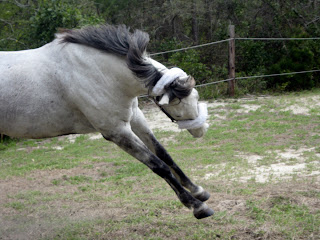 When we weren't riding, Val and I had a number of massages, some deep grooming, and fun! We worked more on clicker training. Val thinks this is THE BEST THING EVER since it involves numerous treats. He caught on very quickly, and offered to target other things besides the cones - such as the jolly ball and mounting block. I haven't thought about "constructive" uses for our clicker work yet, but I can tell that Val enjoys the interaction.

There are subtle changes in our relationship these days. Val often runs to the gate to see me when I get home after work. He follows me around while I muck the paddock, tugging at my hoody and offering grooming. We can groom and tack up without even a halter sometimes, and ground tied most times. We're moving along slowly, but we are moving along. :) 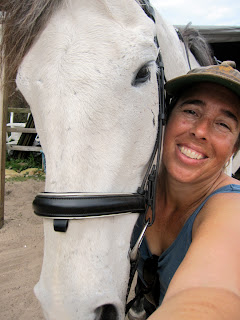