In the Arena #65 - There are no bad rides... OR
the kiss of death might have been when I set up the video camera...

We're expecting crappy weather for the weekend. Yesterday was for sure the day to ride. After cleaning up, I pulled out some fresh hay. Val moseyed into the run-in after me. I groomed and tacked him up while he ate lunch. I didn't even have to halter or tie him, he just hung out for the procedure.

Things were going swimmingly. Our warm up was smooth, but gradually I lost the ability to steer. Ran through the usual reasons, trying to address and correct them, but just could not get it together. Val and I began arguing, and I was unable to muster the presence of mind to resolve the situation. (In retrospect, a healthy dose of forward was likely the answer.)

I became so frustrated that I finally ended up having a meltdown in the center of the arena. Sobbing, tears running down my face. (Not trying to be dramatic - just fessing up.) I've been under a ton of pressure lately, and apparently it's affecting my riding. Worst of all, I was taking it out on my horse. Bummer.

Val patiently waited for me to calm down. Have I mentioned how much I LOVE MY HORSE!! Then we began walking quietly around the arena while I sniffed, hiccuped and generally felt sorry for my self. A bit of a pity party... Well what do you know, suddenly there were no steering issues. The tension in my body had melted away. My seat felt totally connected. Val was relieved. He began to snort and reach. We moved on to some very nice trot work, with lots of two point, and many transitions. Nothing video worthy, but solid work.

Interestingly, Val eventually walked over to the gate, put his nose on the latch, and asked to go out. I opened the gate, and we rode back to the small (fence-less) arena. Since there have been steering and brake issues on our last few outings, I thought that should be the focus for our outside the arena work. There were a few sticky moments, but I coped better than earlier on. I stopped myself from asking for too much, (why is this so hard?) and rewarded even the smallest step in the right direction. In other words, I was patient. It didn't take long to get on track this time.

As we made our way back, Cowboy challenged us by lunging out from behind his run-in, racing the fence line, and generally acting foolish. He ambushed us, charging around at the blind corner beside our gate, which left Val hesitant to enter. As we were in a narrow area hemmed in by my truck and the hitching post, I backed him up, circled a few times, chastised Cowboy, and tried again. Success ;)

Lessons... while we are almost always the cause of riding problems - we are always responsible for resolving them. And with perseverance every ride can be salvaged. 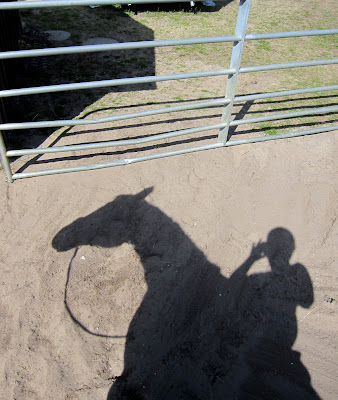